BitCoin or Ether or Altcoin

BitCoin(BTC) is a virtual currency – which is created, stored, validated by a decentralized peer-to-peer network. For easy understanding, let's draw an analogy to a traditional currency, say the USD.

A BTC is similar to the USD in the following ways –

Now, let’s look at the differences: –

1 Clearing: USD valuation against EURO or any other country is influenced by USA monetary policy and thereby, the Internal Revenue Service (among a lot of other factors) and each monetary transaction/transfer undergoes the approval of the central governing body. In the case of BTC, due to its peer-to-peer decentralized nature, it doesn’t rely on a central body. It is a completely open financial network. It doesn’t need any central clearing body to monitor each transaction. It relies on the robustness of the idea of decentralized trust to self-monitor the network, thereby democratizing trust.

2 Tracking: BTC transactions are recorded using the blockchain technology, in a special log book, which can be described as an immutable ledger of transactions (to be discussed later in the article).

3 Acceptance: Unlike USD which is accepted in US alone, BTC is universal in nature as it is accepted as a mode of payment throughout the world. It is unfair to compare it to the US Dollar (which is the most widely accepted and traded currency in the world), but for the sake of over-simplification, BTC is a much better version of a universal currency as compared to the USD or the Euro.

Blockchain is a distributed database that maintains a continuously-growing list of records. These records, called blocks, are secured from tampering and revision as each block contains a timestamp and a link to a previous block (working explanation provided in the next section). These are the underlying building blocks for BitCoins and other cryptocurrencies.

The blockchain is part database, part development platform (upon which newer products can be built), part network enabler and more.

The digital currency function is perhaps the most ‘visible’ one given all the talk on bitcoins. As mentioned earlier, BTC transactions are not monitored by a single central entity but rather by a decentralized set of non-cooperating nodes/entities. These nodes/entities break down the transaction details into smaller parts and store it securely in their databases with a timestamp to indicate the time and a hash pointer/key (ownership pointers) to indicate the transfer of BTC from party A to party B.

The concept behind a blockchain/digital ledger is similar to say, a safe (which has money) being operated by a master key (owner) which is made up of smaller keys given to different individuals (where no two individuals know each other) to ensure security.

How does Blockchain technology work?

Following is a visual explanation of how Blockchain technology powering BTC works. 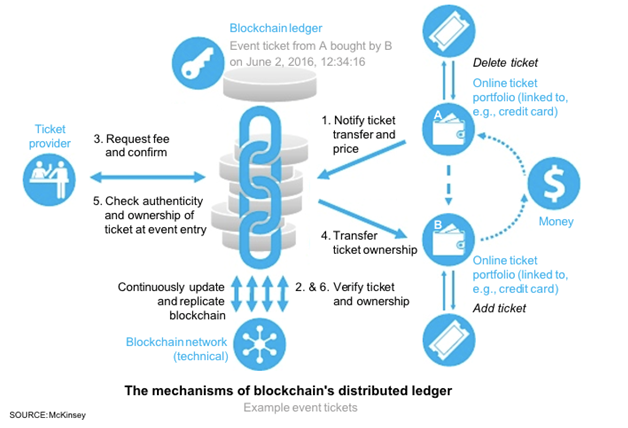 Let’s run through an example transaction, say ‘1BTC is being transferred from Bill Gates to Warren Buffet’. The information of the above sentence is first converted to a unique (to avoid repetitions/collisions) cryptic (to avoid attacks) short form (for efficient storage) via advanced cryptographic algorithms (SHA 256 in case of bitcoins). This cryptic short form, say ‘1BTC-BG-WB’, is now stored in a block and approved by Bill Gates with his secret key (akin to a password) and a public key (akin to an email id) transferring the ownership to Warren Buffet. The block which has recorded this transaction will get 0.001BTC (say) as mining fees.

A block is a part of a blockchain which records some or all of the recent transactions, and once completed goes into the blockchain as a permanent database. Each time a block gets completed, a new block is generated. There is a countless number of such blocks in the blockchain. All blocks are linked to each other (like a chain) in proper linear, chronological order with every block containing a pointer to the previous block and a cryptic short form (hash) of all the data on the previous block.

Why should we use Blockchain technology?

The short answer is – We should. Else we’ll fade into oblivion.

The long answer is – We should use blockchain for the following important reasons:

1. Disintermediation: Two parties (Bill Gates & Warren Buffet) are able to make an exchange without the oversight or intermediation of a third party (banks), strongly reducing time, transaction costs and largely eliminating counterparty risk.
2. Tamper Proof: Following up on the above example, when ‘1BTC-BG-WB’ was stored in the block, it had been signed by a secret and a public key. IF someone were to change the details of the transaction, the keys will no longer be valid, thus preventing any tampering of old records.
3. Empowerment: Users are in control of all their information and transactions.

What are the current bottlenecks?

Despite all the good things, we are still a long way to go before Blockchain and Bitcoin become status quo.

Major bottlenecks in this not-so-long journey are:

1.Regulations: Blockchain is challenging our existing version of Trust, Security, and Reliability. Hence, we see resistance from government agencies and policy makers who are trying to understand and regulate this new technology. Sovereign currencies are being challenged by the emergence of Bitcoins, which in turn leads to several central banks, including RBI, to setup teams to fully understand the implications and finally regulate bitcoins.
2.Scalability vs Decentralisation: Increasing adoption of cryptocurrencies has raised concerns about their ability to scale while maintaining the decentralized nature. While Visa does ~2000 transactions/sec, the blockchain network currently does 7 per second.
3.A polarization of mining power: Nations, like China, having cheaper computing hardware and energy rates currently own a large share of the blockchain mining power (the share is expected to increase further) which goes against the philosophy of decentralization.

In conclusion, as with any upcoming technology, there is still a large amount of skepticism and reservation against the Blockchain Technology. But due to increased awareness owing to the pioneering efforts of the early adopters, this technology is now being used by several startups and corporations to develop new products and improve the existing ones. Over the course of the next few days, we shall explore the applications of this technology in different industries.