Brainvire Goes Big At NRF 2017 in the New York City!

Brainvire’s association with NRF travels a long way back. And undoubtedly, Brainvire graced NRF 2017 with its presence once again like every year.

The three-day event offered unparalleled education on technologies and solution, and collegial networking with newest programs in the industry. The attendees got to hear from the revolutionary business moguls like Sir Richard Branson, Brian Krzanich, and much more. The one-of-a-kind biggest networking show had the entire retail community coming together for 3 days where who’s who of retail industry marked their presence. The show had over 510+ exhibitors, which is huge! 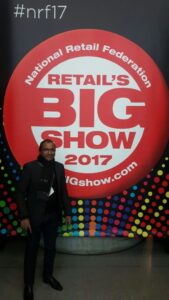 Brainvire’s CEO Mr. Chintan Shah was delighted to meet its clients at the retail show, which included Samir Bhatia from Vitamins Hub and Amazing Nutrition, Matthew Mandell from Condomania, Naveed Iqbal from Healthy Planet, and many more.

The IG Show got even bigger and better when Virgin and Intel bosses, Sir Richard Branson and Brian Krzanich took the keynote stage on the second day of NRF 2017.

"Failing is the best way to learn.” Said Sir Richard Branson, the pioneer of billion dollar enterprise, on #BransonChat while addressing the Space Exploration and Digital Disruption Talk at the NRF 2017. Further, he went on saying, "Retailers should not think of themselves as only retailers. Be entrepreneurs.”

The association attracts the world’s pioneering thinkers and business leaders to address the industry’s most relevant issues, and when we’re talking about pioneers and leaders, Brainvire can certainly not be missed.

Brainvire’s CEO Mr. Chintan Shah is quite overwhelmed to have been present at this biggest retail event. When asked about his visit, he replied, “As usual, I enjoyed coming here. It offered me a different perspective on the growth and advancement of the retail industry. I’ve been a regular attendee here and it was an honor for me to represent my company in front of the thousands of attendees.” Further, he went on saying, “We continue to offer innovations and advanced technology to our clients. Retail is one vital part of our business and what I have learned from the event and believe is that retail’s future isn't what, it is all about WHO. This's why the entire industry arrived together at the event. I have this strong notion that retail is going to change more in the upcoming five years than it did in last fifty years.” He concluded.

Brainvire is one of the dominant IT, Consulting, and Outsourcing companies, globally, with approximately 1,400 individuals assisting clients in more than 80 countries around the world including USA, Europe, Middle East, Singapore, Canada, Australia, India etc. We do practice in ASP.Net, WCF, and DNN with a team of Microsoft Technology Expert, we’re a Magento Certified Partner and work on WordPress, Joomla, Drupal, etc. We hold a best-in-class expertise in the web and mobile app development where we work on iOS, Windows, Android apps in native and cross platform.

Unlocking The True Potential of Data on Mobile ApplicationsBrainvire is among the Top 100 Digital Transformation Enablers on ClutchUnique Mobile App Connects Church Disciples During COVID-19 For A Leading FirmBrainvire Hosted a Stellar ERP Show in Los Angeles, Attended by Well-Known Business Leaders of the RegionBrainvire Sponsored The Future of Retail at eTail 2020