In its fifth year, imagine 2015, an eBay enterprise and Magento commerce conference event had more than 2400 attendees in the form of e commerce developers , ecommerce development experts, business owners and merchants from over 40 countries. They had an amazing time networking with each other, sharing tips, putting up proposals and discussing opportunities.

The conference had an amazing series of activities one after the other, the sessions, the workshops, the speeches, the quizzes and the award ceremonies. However, one of the most anticipated moments was the award ceremony. The award ceremony was divided into various categories like award for the best web design, best Omnichannel experience, best marketing campaign of the year, most innovative, international expansion, best tiny screen/ mobile experience, customer service rock star, best B2B user experience, Magento Pioneer and growth award. 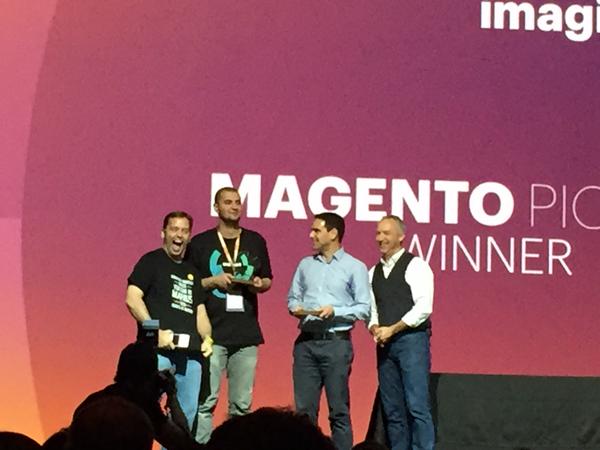 The Brainvire team has taken the interview of one of the winners, Marius Strajeru. He is one of the most talented and experienced developers. In his interview, he has revealed his history, shared his views and talked about his journey from beginning till now… 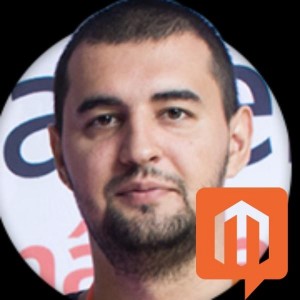 Here is our Mesmerizing discussion with Marius Strajeru.

The Brainvire team congratulates you for the splendid success of winning the Magento Pioneer Award at the grand award ceremony at Imagine 2015. We thank you for agreeing to our interview request; we will be extremely proud and delighted to publish your interview on our website.

Brainvire :How do you feel about winning the Magento Pioneer award at Imagine 2015? Have you ever attended Imagine event before or was it the first time ever?

Marius Strajeru : Hello Brainvire team. Thanks for the nice words you sent. I don’t know what to say about the award. I have mixed feelings. On one side if have a warm feeling inside and I enjoy it (who wouldn’t). On the other side I think it’s unfair that there were a lot of other extraordinary developers that weren’t even nominated. These types of awards are always subjective.

Brainvire :Marius, you are one of the best Magento developers today. When did you realize you want to build up your career into programming? How did the passion for Magento begin? What challenges did you come across in the initial phase of your career?

Marius Strajeru : “are one of the best Magento developers today”…again this is subjective. There is no solid evidence about this.  :-).

I decided I wanted to be a developer in my 4th year at the Faculty of Computer Science in Iasi, Romania. Until then I didn’t see myself writing code (I admit I barely passed my C++ and JAVA exams), but my C# lab teacher really made less theoretical and more practical. And most important he made it fun. I had to work on projects like simulating a football championship, and audio player, an “ms-paint” like software and others. He made me consider a career as a developer.

Later I hit a new turning point in my life. It was July 2008; It was on the first day at a new job. I have applied as a developer for an add-server application, but one of the PM’s told me “You are not going to do that. We have an e-shop we must build. Do you know Magento?” Me: “No what’s that?” PM: “It’s an e-commerce platform. Nobody here knows how to develop on that but we made an analysis and it fits best the client’s needs. Good luck.” I ended up working for 2+ years (on and off) for a project that started on Magento CE 1.0 and when I left it, it was on EE 1.9 during which I had the unfortunate and fortunate to do a lot of small and big mistakes and learn from them.

I don’t know exactly when the frustration ended and the passion started.

Brainvire : Share with us your entire journey right from the initial few years till today, when you are one of the most renowned Magento developers across the world. What were the ups and downs of the years?

Marius Strajeru : I’ve been in the “work field” for about 9 years now. Damn, they passed too fast. My mother didn’t let me work during college years, so my main focus then was school. This had its advantages and disadvantages. The advantages are obvious, but the disadvantage was that when I finished college, I didn’t have any real experience. So I started with a low paying job where someone trained me, then slowly switched 2 other jobs to improve my resume and my salary. In 2008 I ended up at Anais Software, a Belgium company where I did my first Magento project. I described just above my first day at work there. I was really lucky because at first they didn’t put any pressure on me; they gave me 1 month to learn Magento. In this month I didn’t have to produce anything, just learn. So I had time to screw things up and fix them again. I discovered the Magento forum in my first few days, that kind of lacked content and I saw it as an opportunity to share what I learn as I go along. I guess after the first 100 posts on the forum I became addicted.
In 2012 I switched jobs again and got to work and lead a team for more than year on a huge Magento project (for the biggest retailer in Romania). This helped me increase my skills in Magento development and gain some skills in team leading.

Then, in 2013 magento.stackexchange.com came along. And fake internet points can be a good incentive :). So I slowly moved my activity to SE but continued to do what I’ve done for years.

Since 2013 I’ve been working for a different company, where I rarely do Magento projects, but my addiction to SE kept me in touch with Magento.

Brainvire :Which are some of your most memorable awards and achievements in the field of coding till date? How do you feel when you receive an award? Did you feel the same for your Magento Pioneer Award in Imagine 2015, like the way you felt when you received your first ever award?

Marius Strajeru : I get and award every month for coding. It’s called a “paycheck” and it feels awesome, not to mention it “pay the bills”. But this award was different because there were a lot of people watching. For the paychecks is kind of a secret. I like the feeling of getting an award and my 15 minutes of fame so I will try to do what I did so far or even more to get another one in the future.

Brainvire :We would like to know and learn from you; how do you manage to balance the work and home. How do you manage to spend time for yourself after the hectic schedule at work?  Please, share it with our readers; it might help them too!

Marius Strajeru :  I don’t know if I have a balance to fit everyone. I think I found the way that suits me best. I rarely do some work from home. And don’t overdo it at work either. I have a normal 8+1 hours of work and when I get home, I have at least 1h play time with my son. This hour is sacred and non negotiable. And sometimes I do some personal work after my son goes to sleep. Once in a while, when I don’t have a tight schedule at work (this rarely happens) I work on my personal projects. I guess you can always find time to do things you enjoy.

Brainvire :: Most eCommerce stores are prone to security attacks, because of which a lot of people fear shopping from the online stores. So, how according to you Magento has contributed in bringing out solution for the security issues?

Marius Strajeru : I think that from the security point of view Magento (and most of the CMS / Frameworks out there) really helped the developers. The built in security measures and the patches that came out as soon as vulnerability was discovered really took some pressure of the developers. Working with software with a big community has huge benefits because other people might work for you.

Brainvire :Although now is the time, when you have become the inspiration of many; however, we would like to know about your inspirations. So, name any three people who have inspired you throughout your journey.

Marius Strajeru : When I received your e-mail I was expecting this question. I just didn’t know the number of people I have to name. So 3 it is. The order below is just chronological.

You probably remember that Magento 1 really lacked documentation at first. When I started working with Magento I couldn’t get my head around anything. I honestly don’t know this guy’s name. I think it is Dave, but I might be wrong. He was using the nickname “dd_gi” on the Magento Forum (on the first version).  He was really helpful in the “dark moments” of Magento. He was answering all the questions on the forum. Without him I would have probably quit at one point.  So “dd_gi”, if you are reading this…THANK YOU.

So, the Magento pioneer award this year was a “split pot” between Fabrizio Branca and myself. This was a real honor for me. When I saw the nominations, my money was on Fabrizio without any hesitation. I found myself on many occasions using his extensions and saying “Why didn’t I think of this?” He really made developers’ lives easier. Fabrizio is a great developer and a great guy. THANK YOU Fabrizio.

And then there’s Ben. Ben Marks. You know him. Everyone knows him. He’s our community evangelist. I’m sure he’s an inspiration for many people in the community.  Even if he has the best job in the world for sure it’s not the easiest one, but he does it with such passion and dedication and not to forget … humor.  Oh!  and he might just be the second nicest person in the world (after my mother). THANK YOU Ben.

Sorry I couldn’t stop at 3 so I just have to say thank you for different reasons to the following people that influenced my life as a developer and a community member in some way (order is irrelevant):  Vinai Koop, Sander Mangel, Anna Volkl, David Manners, Philip Jackson, Kalen Jordan, Anton Kril, Fabian Blechschmidt, Alan Storm and Allan MacGregor.

Brainvire : Well, talking about the near future, where would you see yourself as well as eCommerce industry in the next five years?

One thing is for sure, eCommerce is here to stay. I cannot predict the direction it’s going, but for sure it will not go away.
Marius Strajeru : As for me, I’m still trying to see where I should go from here. I don’t want to retire as a developer. So now I’m experiencing different paths in my career. I’m trying a bit of team leading because I’m not a big fan of project management, but I like team management. I’m also trying to get some training skills, because I really like sharing knowledge. Let’s have another interview like this in 5 years and I’ll tell you what I achieved.

Brainvire :What would you say if you are asked to give a piece of advice and suggestions to the Magento merchants?

Marius Strajeru : I’m not in a position to give advice to merchants because we kind of play different games, but I could do one suggestion: Talk to your developers from time to time. Most of us don’t bite, and we might have good ideas too.

So, this is what exactly Marius Strajeru had to talk about himself. We hope this was enough to inspire all the developers out there and work even harder in order to attain such great heights. Good luck for the blooming career! 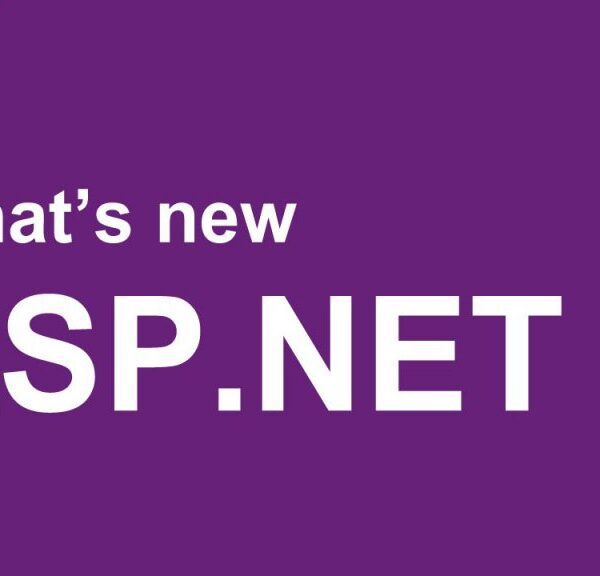