In this generation of cross-platform, hybrid, and progressive web applications, mobile app development is no longer native iOS development using Java. A plus point of working in the service industry is that you will get the chance to discover new technologies.

However, most people are skeptical about what to choose for enterprise app development. React Native enables developers to build native applications in less time frame.

Since the concept and differentiation of react native and ionic react is a little tricky, here, in this piece, you will find the basics, performance indicator of both the frameworks.

React Native framework is a cross-platform solution to build mobile applications on both Android and iOS. This framework needs JavaScript coding using react. In 2015, it was an open-source solution launched by Facebook.

React units wrap subsisting native code and communicate with native APIs through its UI paradigm and JavaScript. This allows a new team of developers to build native apps and also helps other teams to work steadily.

react native app development services does not let you wait long hours to finish native builds with the power of JavaScript. It allows developers to work on existing iOS and Android projects, or to create a new application from scratch.

Ionic React is an aboriginal React edition of the Ionic framework. This free, open-sourced SDK is used to build a million applications every day. The framework offers more than 100 delightful, mobile-ready animations, gestures, and UI components. These mobile-ready options are lightweight and personalized to match your brand.

Ionic React projects are similar to the React ones powering react-dom. The React router is used under the cover for routing and navigation purposes. This framework is congenial with React version 16.8 and above. It enables developers to use CSS, HTML, and JavaScript to create high-defined cross-platform applications.

The notion is that you require to code once and the code can be deployed or run cross-platform on Android, iOS, desktop, and web.

Most people think mobile-based web applications are not native applications. However, this is a myth because a web-based mobile app designed with Ionic React will work more in native Webview control but is eventually a member of the native app UI hierarchy and can access all native APIs.

Ionic is a hybrid framework that uses HTML, JavaScript, and CSS to build applications for mobile, web, and desktop. Ionic applications are built by employing web technologies and are provided using WebView. The hybrid application utilizes a Web View to build mobile-friendly applications.

The notion here is to code once and then reuse it across multiple platforms. So, hybrid applications do not have the permit for native features, like contacts, cameras, GPS, and more. This framework employs Cordova plugins to incorporate native features to the app.

Ionic React procures its graphic elements through a browser. This process takes several steps to commence showing the unit on the screen. However, building web applications using hybrid technologies can easily modify them to Progressive Web Application.

React Native is used to develop native cross-platform applications. A native application is a software app formed with a certain programming language for a specified platform (Android or iOS).

It is created using React and JavaScript but the components are native and provide a seamless experience to the user. Native iOS applications are composed of Objective-C or Swift and Android applications are penned in JavaScript.

Verdict: React Native provides a superior user experience than other Web View based frameworks as the app has Java Coding and renders it through native components. However, if you need an elegant UI that matches your website as a mobile application, go for Ionic.

Ionic React technology is more flexible than React Native. You can use Vue, Angular, and React to create Ionic applications. Ionic 4, the latest update, enables the use of the framework with any web development structures.

Verdict: Till 2018, React Native was superior to Ionic in terms of technology because Ionic Application was created using Angular only. However, with the recent updates, Ionic provides more flexibility in creating Ionic apps.

As we know, Ionic provides flexibility in terms of technology. You can use CSS, JavaScript, and Angular with a preferred framework. You can use React, Knockout, Angular, or another modern web framework. This implies that developers will choose the framework that they are aware of.

Verdict: Ionic has a lower learning curve since it allows you to choose the framework that you are comfortable in. On the other hand, you only get React to code in React Native. For a beginner, the React Native learning curve is higher than Ionic.

There is no such perfect framework that will suit all your needs. React Native and Ionic have some similarities, but a lot of differences. So before picking up the right framework make sure to evaluate your use cases. 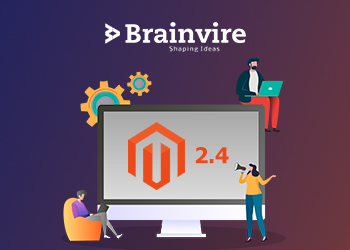 How Mobile Applications Are Changing The Face Of Financial Services?

HOW HAVE BUSINESSES BENEFITTED FROM MOBILE APPS?