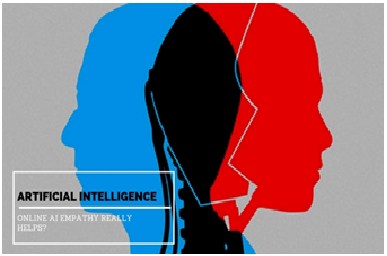 Ever tried seeking empathy from online AI bots? You should.

Artificial Intelligence Empathy is the new cool, and in case, you weren’t aware of it, you’ll at least manage to get a quick look about it in this article.

For centuries, human beings have spared quite a thought to elements that distinguishes them from the animals. Sure, there’s a huge difference between animals and Homo sapiens, many find it interesting to argue that the basic thing which sets us apart from animals is our superior ability to reason. In these last few years, we’ve managed to move to a new horizon. We’ve moved our attention to what separates us humans from machines.

The science of AI has advanced rigorously in a short amount of time – we’ve arrived in a time where computers interact much more like humans! Uncanny? Yes, but fascinating! The greatest hurdle in developing AI isn’t creating something which is quite intelligent. The biggest challenge is to create something which interacts like humans – or bears sheer resemblance with human behavior.

Mental health is a frontier that is currently trending in the space of Healthcare App Development. If you’ve a brief browsing history of fetching information on mental health via Google, the “YOU MIGHT LIKE” ads related to similar searches popping in the sidebar of Facebook shouldn’t be a surprise to you.

Right from the miracle of artificial intelligence “The Empathy Bots” to one-on-one counselling services, startups have become quite eager to take a leap into the newly de-stigmatized subject – Mental Health Space. However, the main question is, do such AI powered system really help? Can they replace the need of psychologists? Are Web and Mobile App Development companies ready to tackle a complex issue as this? Will they be able to offer sophisticated solutions whose realms lie far away from traditional medicine?

The Answer You’ve Been Looking For!

Prevention of suicide is most likely the nearest thing to conclusive confirmation of idea for psychological wellness applications, on account of the success a few administrations have had in identifying signs of warning in behavior of user before loved ones notice it. Suicide holds the second rank for being the cause of death for US millennials, driving many to feel that if any solution which works — even if it’s for some time — is extremely valuable.

For one thing, the appropriate response is "yes and no" both. One could without much of a stretch consider it as a tepid one, in case, you question a majority of individuals in the business. Their perspectives are divided into sharing a common belief that artificial intelligence empathy bots are extremely helpful Vs they're a misguidance/obstruction.

Different organizations in the space are focused on the everyday dissatisfaction and depressions we all experience. An iPhone application – Koko – which assists users fetch fresh outlook on their issues, has confronted feedback and acclaim for their crowd sourced service of micro-counselling. Users who interviewed for The Verge portrayed their experience as positive and accommodating. Morals setbacks with testing bot guides on Reddit, be that as it may, placed the firm in a less complimenting light.

The Future of Artificial Intelligence in Healthcare App Industry

Despite how individual iPhone application designers handle the psychological wellness issue, Med Tech is one of the fastest developing fields in world of startups. In a well-connected world, the overall population has turned out to be more accustomed to using their smartphones when they require assistance. Sooner rather than later, application developers may give a comforting presence, new viewpoints, and even life-sparing emotional well-being administrations, in the field of healthcare app development.