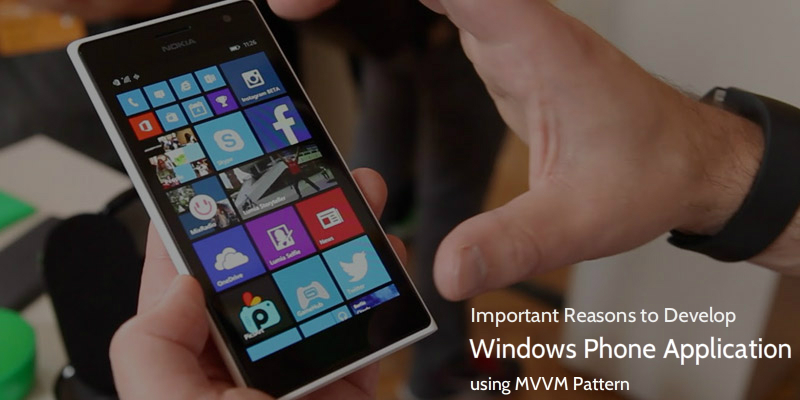 MVVM, also known as The Model-View-ViewModel architecture pattern was first introduced by John Gossman for use with WPF. It was implemented with an intention to provide separation between user interface controls of an application and their logic.

Implementing an application on MVVM pattern would require leveraging some specific capabilities (commands, data binding and behaviors) of XAML application platforms like Silverlight and Windows Phone. Just as the other architecture patterns like MVC, MVVM separates the concerns for appearance i.e UI and logic of the application.

Many prefer to implement MVVM architecture for the Windows Mobile application development and the reasons for this are:

a) It supports a modular architecture that enables the components to be built and tested independently.

b) It offers loose coupling benefit which makes easy to make changes to one part of an application without affecting another one or requiring another one to be changed.

c) It makes maintenance of the application lot easier during upgrades because of ease to implement the changes due to its well-structured design.

d) It makes the application less prone to errors as separation enables development with lesser coding and hence, less code is equal to less errors.

e) It enables automated unit testing of code and hence, no UI based testing would be required.

2. It enables easy designer-developer workflow. Here UI is loosely coupled with the code and hence, it allows a designer complete freedom to implement his/her creativity to make up for a good product.

3. It improves testability for an application. UI testing becomes easier with MVVM as here UI logic can be easily moved to a separate class which can be instantiated independent of the UI technology.

4. MVVM is a natural pattern for XAML platforms and hence, enables data binding stack and dependency properties for an application. So, now UI can easily connect to View Model as result of combination of these.

Where can You Build Windows Phone Applications based on MVVM?

Windows Phone application development on the basis of MVVM pattern requires using Visual Studio. The applications would be built with three layers called Model, View and ViewModel with dependencies.

Initially select File->New Project in Visual Studio. Here either you can start your application code from scratch or select “Silverlight for Windows Phone” from the Installed Templates to develop a Windows Phone application.

So, are you looking to develop Windows phone app for your business, then do not wait. Hire expert developers of Brainvire Infotech. At Brainvire, we have experienced Windows developers who have hands on experience into client projects and have developed number of apps for various business needs. Contact us to get a free quote for your development needs.