Mobile Website Development: Who Will Be The Browsing King – Chrome Or Safari?

The advancement in mobile technology has amazed the world. On an average 80% of the Smartphone users seeks mobile optimized product information while they’re shopping in stores. Moreover, people between the age 25-34 are extensively using mobile devices for productivity, and they generally have employment to pay for the contracts to buy the phones on the go.

When we talk about the Smartphones and internet usage by the mobile users, the only thing that can help them browse through their mobile devices is mobile browsers. While the significance of mobile website development is on the surge, the battle to win the number one mobile browser is also getting momentum among a few of the most popular mobile browsers.

According to the recent figures from the Pew Research Center, Android has eclipsed the iPhone as the user’s phone of choice. However, a few days back the Safari browser failed to hold its position as the leading browser for the Smartphone users. 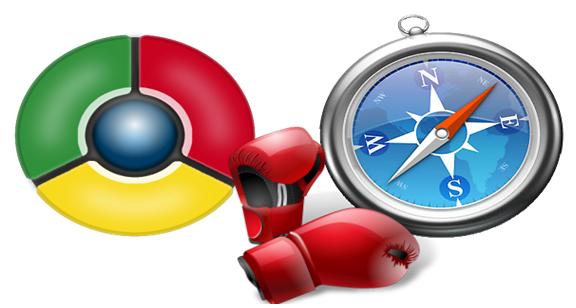 Safari vs. Google Chrome - Who’s going to win the battle?

There is no doubt that the iPhone was at its peak during the year 2012, but as the year passes, Android has started getting momentum by capturing almost 28% of the Smartphone market share as compared to Apple’s 25% market share. When we talk about Google’s Android, how can we forget about its another product Chrome, which is at the third place beneath Safari and other default browsers of Android.

If we talk about the growth, then Google Chrome has seen a great rise on Androids each quarter ever since the end of the year 2011. While Chrome managed to gain consistent growth of one percent every quarter, Safari fails to manage the same growth. Does it mean that Google Chrome is all set to become number one browser choice for the Smartphone users?

One of the major reasons behind the growing popularity of Chrome in mobile app developers as well as the users is because a far better user experience offered by it as compared to what's offered by the iOS browsers. Moreover, Chrome supports latest web standards, which makes it more usable for the mobile users.

When we talk about numbers, we have to consider hardware statistics for Safari as its current ye ebbing dominance in the market. If we have to say this in a simple way, then we can say that if the iPhone is the leading Smartphone in the market, then safari will be by default successful as it’s a default browser application in all the iPhone.
Up till now, Apple was ruling the market, but ever since Google has launched Jelly Bean and the tablets, Apple has started losing its market. However, Google has yet not made Chrome as the default Android browser, but if it does, then it won’t be a bad option.

If we remove the Android’s default browser, then its market share will directly go into Google Chrome’s account for sure. Moreover, Chrome doesn’t have any tough competitor except Safari.