Angular.JS And React.JS- Incomparable, But Still The Rage Is On!

You might be puzzled after seeing such a stupid question because even a child can explain you about this, in detail.

Well, I am not fooling you around.

The same is the case with developers for Angular.JS and React.JS, which are popular for front-end web development.

Both technologies are JavaScript based, developed for the same purpose and their functions overlap somewhere, but still, there is a huge difference between Angular.JS and React.JS that both beginners and veterans also wanted to know.

Also, one more question- which is better to consider?

Before we head up to dispel the confusion between Angular.JS and React.JS, let’s take a glance at the JavaScript technologies are. 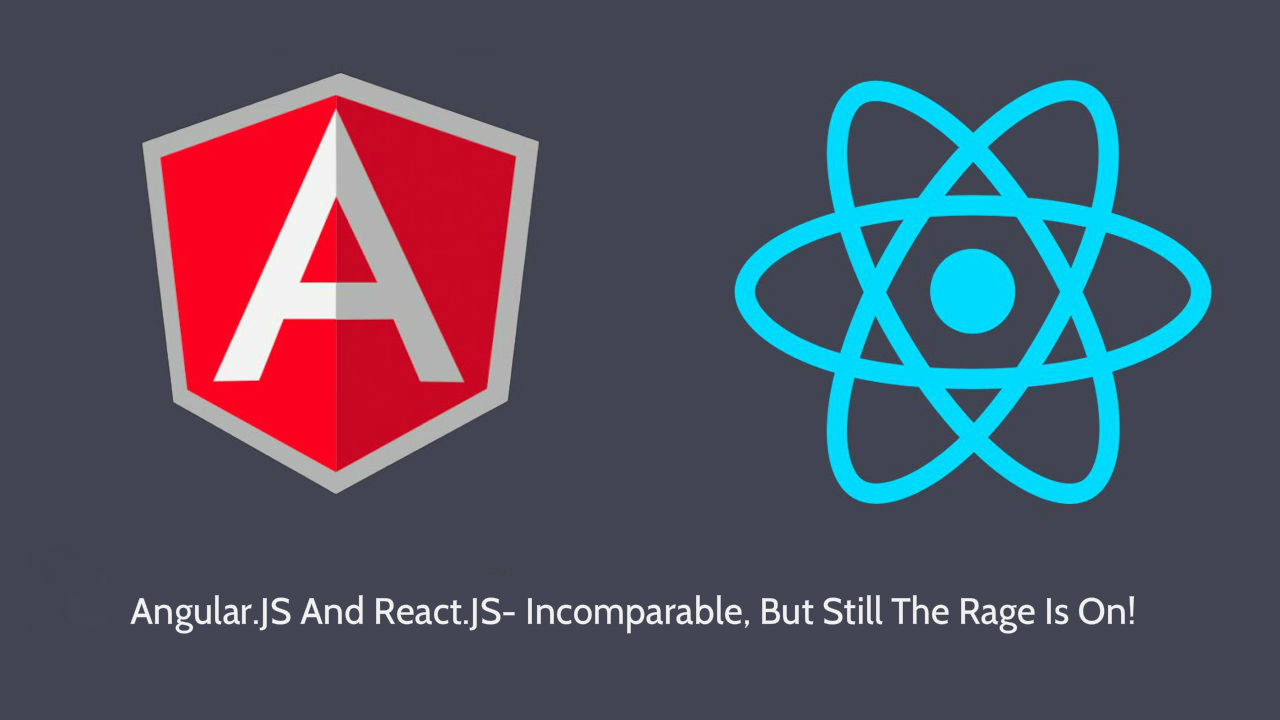 Angular.JS: The JavaScript framework was released in 2009 by the Google. The framework is widely adopted, supported and upgraded to build the applications of modern time. Dependency injection, Two-way data binding, Angular directives, and Templating engine are the primary reasons behind its popularity. When applications built using Angular.JS, the setup code needs a view, controller, model, and directives. Recently, Angular.JS 2 has been buzzing in the market because of the new features added to it.

According to W3techs survey, “The market position of Angular.JS in terms of popularity and traffic is quite good as compared to the most popular JavaScript libraries.”

Its usage statistics for web development is stupendous! 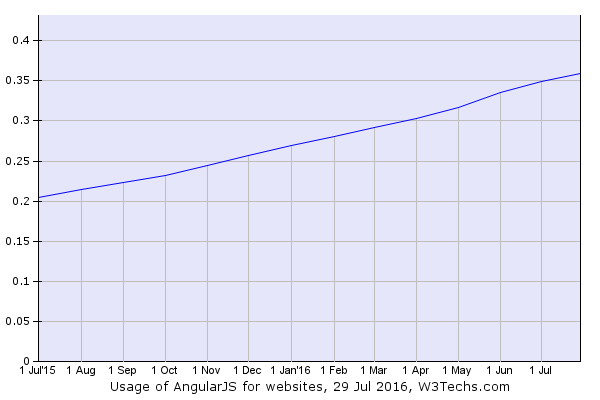 Here, its country wise usage, according to W3cook.

React.JS: The popular JavaScript library that’s released by Facebook in 2013. The library was built to update the dynamic content for Facebook quickly, and now, it is maintained by Instagram, Facebook, and open-source community. It is known for developing apps that provide excellent performance due to the presence of some key differentiator like- virtual DOM, JSX files, server-side rendering and React native.

According to BuiltWith research, "The library usage for website development is heightening." 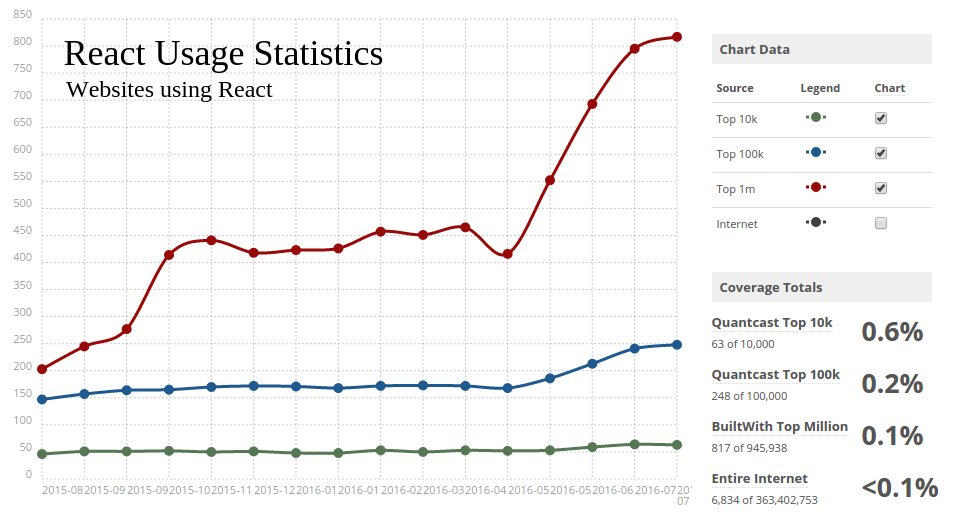 I think we have delved into the depth of both Angular.JS and React.JS quite enough, so let’s begin counting the differences between the two. Here, they are:

Yes, learning Angular.JS is not plain-sailing. Albeit, it’s easy to get started, but as you start experimenting with features, tools and concepts, the Angular.JS app development become complex. Mastering Angular.JS lifecycle demands complete code reading and dealing with individual cases is confusing.

And, React.JS is like a one-way street that can be quickly learned almost in a week and once learned, working on the React.JS app development becomes a breeze.

Packaging is the best practice to run and deploy the code the way you desires. It directly impacts loading time. So, if technology supports code packaging, then the app built using the technology would load faster. Also, add-on of new features won’t influence the load time, even by a small margin.

Angular.JS uses HTML templates for simplified web app development. But, it is too rigid to provide the tools where code packaging is possible for running and deploying the code the way one want. Consequently, the code looks obsolete.

Abstraction is great to hide the low-level information related to the system that’s very complex to handle and not required during development. This way it enables fast development by providing an ideal interface to the developers.

In Angular.JS, the abstraction is leaky. The reason is, using Angular.JS, one has to open the code to comprehend its underlying model and this way the concepts are revealed.

Unlike Angular.JS, in React.JS, the abstraction is effective due to Mixins integration. The developers are not allowed to add a single tag for a component or attributes to HTML tags.

Here Angular.JS excels because it supports bi-directional data binding where every time when the data is exchanged between model and ‘View’, it get sync automatically. This way all the changes get mirrored. Also, developers can keep track of all the changes made by using event listeners.

Instead, React.JS provides one-way data binding wherein the data changes made to the model will get updated to view component, and vice-versa is not possible. To set up the typical data loop pattern or link data source to React.JS, syntactic sugar is provided

Many times, during app development and testing, we encounter the scenario where something doesn’t work. So, in place of re-writing the code, we prefer to identify where the problem is.

To determine the loophole, we need to open the code and find out what’s there in it that's not letting your code execute. This process is termed as debugging.

Angular.JS is event driven that makes code writing easier, but debugging becomes a hard nut to crack. To make the debugging easier, Angular.JS provide ‘Constructs’ that can be used by the programmers to separate the code and logic.

React.JS is packed with many tools and extensions that complete all the virtual DOM work to make the debugging task easy.

Well, not recommended, but Angular.JS is very popular, and a lot of app development is done using the technology. It means there is huge community support and available code to reuse.

The same is the case with Angular.JS as developers could find a good amount of ready-made stuff to build the apps at ease. However, they must be knowledgeable about angularjs development services along with various libraries and tools.

React.JS, not as old as Angular.JS, but it’s flexible and enable developers to use the existing code, the way they like.

Churning is the attribute where even the veterans stuck. With technology evolution, less number of frameworks or libraries when get updated or when their new version is released, they remain stable.

Angular.JS is a stable ecosystem that’s less likely to churn out after any update. So, choosing the comprehensive framework will not prove to be a wrong decision for you.

Relying on React.JS could be tricky. As the library churn frequently and you may need to make sizeable changes in the future.

It’s better to select the mature framework or library.

What to prefer- Angular.JS vs. React.JS?

The two frameworks provide unparalleled services and have their own advantages upon using them.

If you want me to declare a WINNER, then my answer is BOTH Angular.JS and React.JS.

Yes, all it depends on the type of features and functionalities you are looking for your application. The same is elucidated above.

The list of differences is quite long, but I have illustrated just a few that you mostly consider. So stay tuned with us to know more about the two JavaScript technologies.