Everything You Need To Know About Asp .Net Core Platform

In this span where you can’t take your eyes away from feature-rich websites and the stunning online presence of businesses, aspnet development has acquainted a notable position aboard titled as a robust and scalable development platform.

With the advent of technologies from hard disks to cloud servers, many robust platforms have emerged as comprehensive development tools and as you know, ASP .Net Core is one of them. Earning significant concentration as most reliable business application development platform, Microsoft's.Net Core platform is one of the reasons behind reliable and successful web applications.

Digging up a little in ASP .Net Core:

ASP .Net core is a free and open-source web framework that comes up with advancement and next-generation level of ASP.NET Web applications. It runs on windows .Net framework as well as on the cross-platform.Net Core. This framework has given a whole new feature of concept compatibility with through reframing the ASP .Net MVC architecture.

It is a complete programming environment that takes extra care of cross-platform functionalities. Specifically built a framework for web and cloud scenarios, ASP.Net core has the base of a robust and optimized runtime environment .Net core.

Based on modular designs, .Net core architecture is emerging as highly reliable software stack that used to build asp.net applications. It is similar like .Net framework but it has also, its own set of libraries which are used to build dynamic, highly scalable cloud and web applications. The significant characteristics of .Net core is it has cross-platform application features and supports Universal Windows Platform apps. 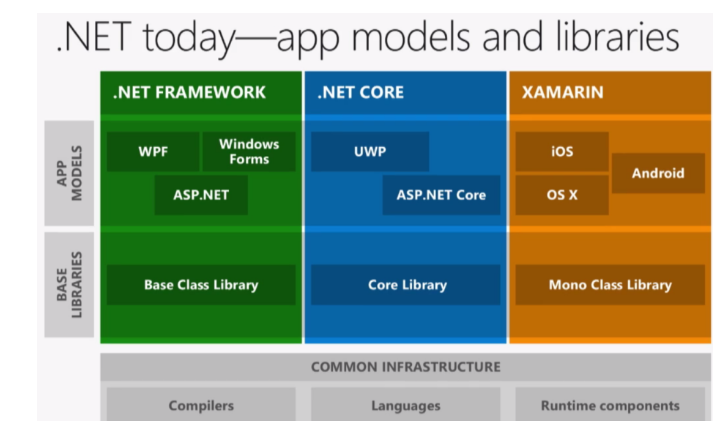 The above diagram shows a current scenario for developing an application with .Net framework and .Net core. The .Net core library supports many enhanced aspects that are optimized and well-executed in order to remain advance with cloud servers and scalable apps.

It is not entirely true that .Net core and .Net frameworks are similar. Many APIs and features of .Net framework is taken by .Net Core. But, with the different architectural pattern, it has its own set of library and APIs. It is completely different than the previous version. In fact, it has started a new way and takes a leap in the advancement of developing technologies in .Net.

The focused point of difference is, the .Net framework 4.6 is based on windows and it has now rebuilt and called as ASP.Net core that is based on cross-platform concepts.

So, if you want to build an application in ASP.Net core, you can use .Net Framework 4.6 along with .Net core or .Net core as a single base. ASP. Net core is rewritten from scratch and it runs across various operating systems such as Windows, Linux and, Mac (non-windows operating systems).

Choosing between .Net Core and .Net framework for application development

Now, there are two choices of the runtime environment to build server-side web applications, .Net core and .Net framework.

However, it is the highly subjective basis on your requirements, though; there are significant differences among them. Here is a quick look at the scenarios:

When you should choose .Net Framework:

Well, looking into existing .net applications, .Net framework likely to be ultimate choice despite having significant advantages provided by .Net Core. This is because; there are so many requirements still to be fulfilled acquired .Net framework as a solution.

It will not be replaced by .Net core in such scenarios for server-side and interactive applications.

There is no need to migrate to .Net core if you have a current application in .Net framework. Additionally, you can enhance your application’s functionality by crafting a new feature into .Net core. Instead, .Net standard is all set to take the universal base for all .Net flavors. Thus, you can easily integrate various APIs and libraries for optimized usage.

There are some technologies that are not supported by .Net core and that is why many found .Net Framework is a preferable choice to develop web applications.

Apparently, if you have a need for web service/application that should be run on the non-windows operating system (Linux, macOS) then you should take asp.Net core into account.

- When you are developing highly scalable applications with cross-compatibility

- You are likely to target microservices and its architectural performance

- When you have a need for alongside development versions need of .Net platform

Asp.net core has now no base for DLL execution. Besides, it supports well-managed and required NuGet Packages to make the rapid execution. 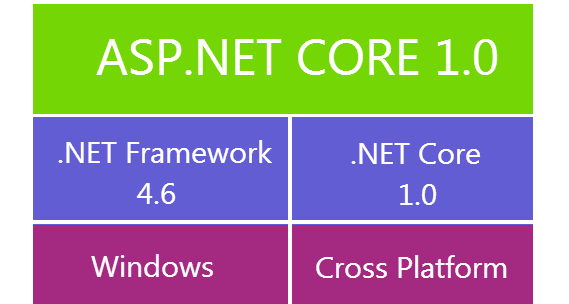 Well, the business requirement and functional feasibility are at the core to decide what you should choose. But this is a fact that, Asp .Net core has changed the way of cross-platform application needs from the core! With the high reliability for a scalable application and serving huge requests per seconds, it has won the title of ‘preferable choice’ for transforming your business needs into the web presence.

Embracing the technology and optimizing asp .net core framework, one can be sure of projected expansion of the business!