What lies in the Future of Mobile App Development? 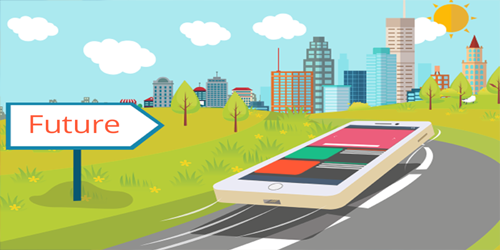 If one chooses to go with the status of current statistics, a minimum of 2.6 billion individuals has a direct access to mobile phones throughout the world. It's quite irrefutable to say the "Smartphone Boomâ€ leading to mobile apps has completely revolutionized the approach - we - "the humans" operate, or better yet, interact. This so-called boom, as I describe it, is inexorable, and I'm sure you'll agree. Business owners can kiss a goodbye to customer satisfaction without these apps.

If I take my own example, I'm a self-acclaimed smartphone slave! I don't even remember the last time I used the good ol' landline to get in touch with my friend. In that case, iMessage and WhatsApp have been doing just the fine job for me. And, I think you might agree with me on this one. Mom calling? Busy? No time to take the call? Reply her over the WhatsApp instead. Mobile app development has made our lives that easy!

You might like to think about it from a professional or let's say, business point of view. The so-called smartphone boom has also led to a burgeoning, cohesive growth in the technology industry as well. The major booming businesses and startups these days are revolving around the enterprise mobile app development or app development in general for smartphones.

Businesses these days are striving to come up with a glut of mobile applications to get ahead in the competition. Name any - restaurants, hospitals, commercials store, or any other form of business â€“ you'll notice one striking similarity between these sectors, i.e. their investment in mobile app development as per the latest mobile trends. This is helping them to get closer to understanding and serving their customers, which naturally makes app development "a major priority" and a budding business" nowadays. No wonder why mobile app developers are in a huge demand!

Let's find out, shall we?

App Trends - In a Nutshell

Down right here, I've mentioned a few mobile app development trends we're going to be possibly surrounded by in the future.

For long AR & VR apps have been considered something as puerile and being laughed at. According to many, it's quite gimmicky only meant for promotional stuff - I wouldn't say the same! However, the truth is, it is way more than just some promotional platform. Believe it, it's the reality! Using AR/VR apps certainly, tend to make lives easier. It introduces an intricate and highly effective functionality and is certainly going to rule the future and the possible sectors benefiting heavily out of it are going to be â€“ film industry, gaming industry, hospitality, real estate, advertising and media, and healthcare amongst many others.

Shift towards the Universal Applications

Take iOS devices, for instance, there are so many available out there - iPad Pro, iPod Touch, iPad, Apple TV, iPhone, MacBook, and Apple Watch. The tremendous rise in the number of devices suggests the importance of having an app that runs well on all the platforms. Also, with the increase in the demand for universal apps, more and more developers are looking forward to coming up with an application that serves right to the universal usability.

Oh, yes! AI is a reality now. More and more are arriving with built-in AI capabilities, and we can expect more of it in the future. App users want mobile apps that can sense their situation and mood, and function as per the requirement. Millennials have become so accustomed to it so you can definitely expect more of AI in the future.

GPS-based Apps in Use

Investments made by the companies in order to continue offering mobility across the organization are more likely to increase. Companies are more focused on programs rather than projects these days. Mobile is all set to become a vital part of any business or digital transformation, or it already has.

Bring in the More Algorithms

Algorithms have become a key to success for digital companies. The leading behemoths are already processing the data in such ways which can benefit both internal operations and end users in whole. With tons of mobile data processed throughout the day, businesses from every industrial sector are focusing more on algorithms as an imminent segment of the backend infrastructure along with data's cloud processing. With the hike in-app intelligence, the success of such strategies depends on the investments made on algorithms in order to process the bulk of data meanwhile delivering quality value to the users.

We usually visit the Google Play Store or Apple App Store to download the kind of app we want. It's quite a lengthy procedure, don't you think? Well, a recent trend suggested by Android allows users to use the preferred apps directly without having the necessity to download and install it. This will prevent users from wasting their mobile data unnecessarily on downloads. We can definitely expect this in the future.

The IoT hacking incident from almost two years ago has brought a great scrutiny towards security, especially when the world has started revolving around IoT. More emphasis will be laid on the security part because IoT-based enterprise deployments or consumer deployments either can't be left vulnerable to security hacks. So, one can expect such apps very soon.

In case if you had no idea about this already, now you do! You must also know that a thing known as Mobile Application Testing has arrived as a boon in disguise, which is being done to test the future possibility of mobile apps.